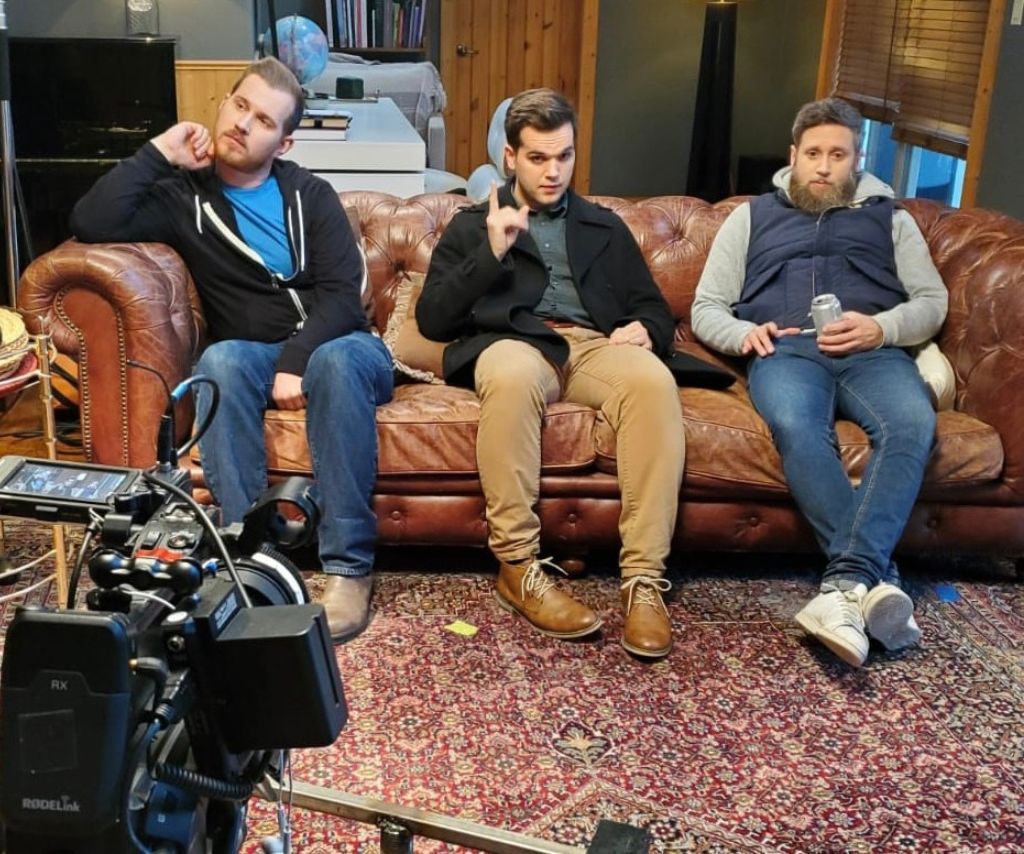 Meet the team of Deliver Us Not! In our latest blog, we will figure out what to expect from this production.

Briefly introduce yourself/your company…
Our trio met in film school in 2013. We shared the same sensibilities for performing, especially when it came to comedy. Once film school was finished and we were forced out into the real world, we looked for any opportunity we could to produce content that we thought would be entertaining and people would be able to laugh at. Or with. But probably mostly at. This included everything from stand up comedy, to a comedic beer review on YouTube (Beer Me), to our recent first short film, which is currently making it’s way through the festival circuit, having already picked up some awards in the process. Please forgive the self-congratulatory nature of that description, but we’re performers – validation sustains us.

What is it that makes your work/company unique
We tend to try and take existing ideas or well-trodden themes and tackle them from a different angle. For example, when creating the idea for our comedic beer review, we knew that there were already tons of reviews available for all sorts of beers and spirits. Overly qualified people to tell you about the brewing process, flavour profiles, notes, etc. We thought, well nobody we know drinks beer for those reasons, necessarily. So where’s the review for lay people who just want something that tastes pretty good? That’s our approach to most of the content we produce. It has a blend of irreverence, but sincerity. We’re passionate about what we do, but we don’t take ourselves too seriously. Unless we’re performing surgery.

What kind of experience do you hope audiences will have during your show?
We hope for a laugh. Two would be nice. In all honesty, if our show can simply be a form of comedic escapism for the audience, however brief it may be, then we’ll be delighted. If it causes even one person to be open to a slightly different perspective on what life has to offer… then feel free to buy the first round after the show.

Without spoilers, tell us what you think audiences will remember most about your show?
The costumes. Maybe the sound effects. But our money is on the costumes.

What do you think is the best thing about the Fringe?
The community. Every person from all walks of life coming together to put on a show. We’ve been doing it long before air-conditioned cinemas and surcharges for 3D glasses. Which is in no way a knock against big-budget blockbusters. We love them! But being able to see people create something in front of your eyes, and not just see their names listed in the credits scrolling on a screen – that’s incredibly special. Something we’ve maybe taken for granted a little. You watch a live performance, and for better or worse, it will never happen exactly that way again. You get to be a part of something unique.

What is the most important thing you hope audiences will take away from your show?
Deep, existential questions we all have about why we’re here, who we are, and what it all means – those questions can be profoundly funny. Everything can be funny. Not in a disrespectful or irreverent way either. Shifting your perspective, even temporarily, can yield incredible insight. That, and the realization fetuses are incredibly articulate before they’re born.

Tickets for Deliver Us Not! are on sale now, taking place at The Nest from 8 – 18 Sep. Book your spot today for just $15 per person!