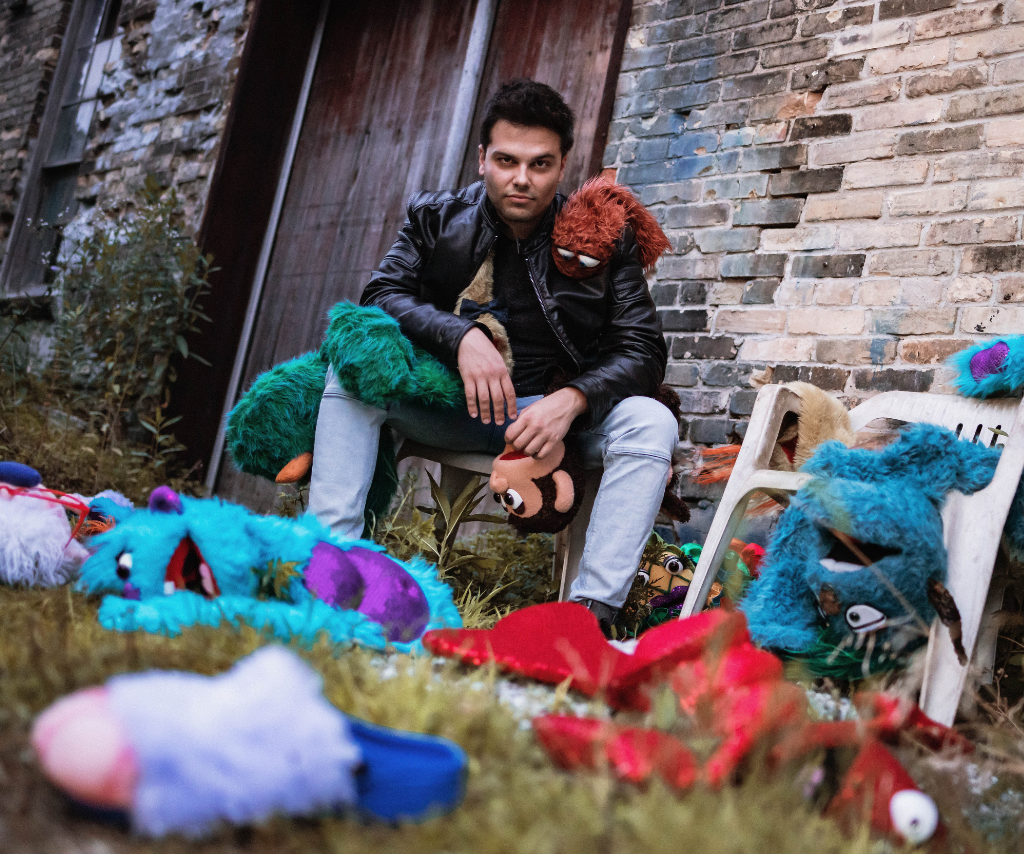 Fresh from Toronto, Adam Francis Proulx of The Pucking Fuppet Co. jets into Vancouver with The Family Crow: A Murder Mystery. In our latest blog feature, allow the main man himself to detail what’s to be expected from this punchy puppet-infused production.

Briefly introduce yourself/your company…
My big thing is…. I don’t want to make puppet shows… but I do want to make theatre that uses puppetry to help tell the story. I like to use puppetry as a tool in the theatrical toolbox.

The Pucking Fuppet Co. has been at this since about 2014. With this company, I produce original theatre and build custom puppets for stage and screen. I’ve built stuff for CBC, Nickelodeon, Freeform, Young People’s Theatre, Why Not Theatre, and so on.

I got into puppetry a bit when I worked at Walt Disney World in Entertainment but then it all really took off when I was in the first Canadian cast of Avenue Q. My first show was BAKER’S DOZEN: 12 Angry Puppets, in which I use one blank puppet and a briefcase full of eyeballs and noses and stuff to make it into twelve members of a jury. I’ve been all over North America with this show and won a bunch of awards. People seem to like it. I have a family musical called Adam’s Unplugged Puppet Party that I developed in residence at the Victoria Playhouse Petrolia in 2019. One of my shows in development is called How to Hug a Porcupine and in 2021 I did a virtual workshop of it (with Byron who also directed The Family Crow)… because the workshop was virtual, we basically ended up with a short film and then got into some film festivals and won some awards with it.

My first time doing Vancouver Fringe was 2015 with BAKER’S DOZEN: 12 Angry Puppets (Patron’s Pick, BC Touring Council Award) and then I also came back with a duo show in 2016 called Does Not Play Well With Others.

What is it that makes your work/company unique?
In my work with the Pucking Fuppet Co. I don’t usually set out to make puppet shows… I like to use puppetry as a tool in the theatrical toolbox. Why is puppetry the best way to tell this story?

The shows are usually (but not always) for adults, they are funny, and they often have a social conscience. I also like to experiment with the opportunities that come from having a visible puppeteer. I’m not about the thing where we pretend the puppeteer isn’t there, or all in black, and staring blankly at the dolly. If I’m gonna be there anyways, how can I help tell this story?

What kind of experience do you hope audiences will have during your show?
My favourite thing about the reaction to The Family Crow: A Murder Mystery is how people get into the spirit of it. People tend to yell at me from across the street, things like, “YOUR SHOW WAS PUNDERFUL” or “ARE YOU HEADED TO THE CROW BAR?” Even the sourest and most haughty of critics will put stupid puns in their reviews. And that is really the point of it. It’s clever sometimes, sure… the puppet is cool… the mystery is well-crafted…. but we need a little silly right now. The world is on fire, you guys.

Without spoilers, tell us what you think audiences will remember most about your show?
I’ll tell ya what they WON’T remember. My face! I’m not hidden in the show AT ALL and yet people have no idea who I am. At first it was nice for my introverted soul. But then I started to find it hilarious and at least 2% offensive. I had a full conversation with a woman at Orlando Fringe, while I was wearing a crow t-shirt, holding an award that had my show name on it, and after 5 minutes of chatting she said, “And what is the show that you’re doing?” I told her and she said, “Oh! It was fabulous. I saw it twice.” At Montreal Fringe, I was cleaning up the stage after the show and two men came up to me and asked if the guy who did the show would be coming out.

I hope people remember the puppetry, the goofy puns, the mystery, the twists and turns, and the care we have taken to delight the audience.

What do you think is the best thing about the Fringe?
I love so much about fringing. I love the sense of community, the chance to absolutely gorge on bite-sized theatre, and the chance to meet people and see shows, all of which are completely unique.

I love Vancouver… and I love travelling. The pandemic taught me that I didn’t just enjoy travelling as a bi-product of my job. It is like the top reason I do what I do. I guess the puppets are fun too.

What is the most important thing you hope audiences will take away from your show?
Listen. Most of my shows have a social conscience. Or some sort of commentary. This… this is not that show. i can’t even spin it. It is some good storytelling, a cool puppet, and some undeniably goofy puns. Those looking for deeper meaning, look elsewhere. Honestly, that is what I have the capacity for right now, and I think a lot of us are like that at the moment. So I hope the show brings people joy and escape.

Tickets for The Family Crow: A Murder Mystery are on sale now, taking place in Revue Stage from 8 – 18 Sep. Book your spot today for just $15 per person!